Ten Years Into The War, Syria Is About To Go 'Supernova' 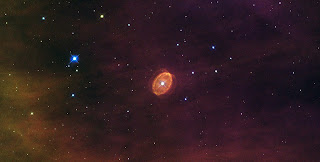 When a star can no longer support itself, its core collapses on itself releasing gravitational potential energy in a powerful and luminous stellar explosion known as a supernova. The star either collapses to a neutron star or black hole, or is completely destroyed.

Ten years into a destructive war, Syria appears to be closer than ever to its own “supernova”. Hundreds of thousands were killed, wounded, went missing or got displaced. The country’s economy is in deep trouble.

Today it is clearer than ever that Syria, just like a dying star, can no longer support itself. Soon the country will collapse on itself in a violent manner.

Frontlines have been frozen, but the country’s economy is in a free fall and the political process can’t possibly be more dead. It is easy to take sides and accuse someone here or there, but truth stands that today, no Syrian is willing to make any concessions.

As Syrians we disagree on how the war exactly began, everyone has his own story, but we do agree on one thing, and one thing only, we are all too deep into this. There is no coming back.

Syrians, on all sides, lost their homes, their business and most importantly lost their loved ones. You can’t expect anyone who lost so much to “forgive and forget". You can’t expect Syrians to simply move on and live together just like before. It is very realistic to say this will never, ever happen.

In fact, it is kind of rude and insensible to ask Syrians to “forgive and forget.” I will not forget the time my mentor was abducted in Damascus’ Eastern Ghouta, or the time I woke up to my neighbor weeping over her nephew who was slaughtered in the Western Ghouta. Others lost much more than me. You can guess how they feel about key principles of reconciliation like forgiveness and tolerance.

So much talk going on now about “transitional justice” in Syria as if the war ended or a political settlement was reached. A fantasy in the mind of some who appear to be detached from reality.

Don’t get me wrong, I personally have nothing against transitional justice, it is just that as a Syrian who actually lives in the country I know very well that this principle can’t be implemented in Syria, not now or in a hundred years. It is a mere fantasy in the heads of some people, who should take a deeper look at the situation in Syria today.

Syrians can’t forgive, forget or hold their killers accountable, they can’t simply bear each other anymore. Today, Syrians have no sense of unity and no sympathy to each other.

After ten years of killing, it is naive to think that Syrians are capable of reaching a peaceful settlement that would allow the country to move forward as a whole.

The last two years demonstrate this very well. Syrians on all sides were more than willing to bear unprecedented hardships to avoid  making any concisions. Syrians have made it clear that they will not bend the knee to each other. They would rather live in tents, or starve. It is a war of pride now.

The amount of horror and trauma Syrians went through in the course of ten years of war justifies their stand.

Despite this, the international community seems to be holding on to the failed political process, to a settlement plan that will never work out. Why? I have to ask as a Syrian.

I don’t thinks that those sitting in the world’s key capitals actually believe in this plan. I’m not that naive. I think that they see this plan as a publicity stunt, a show to divert Syrians away from their miserable reality.

And again, don’t get me wrong. I don’t think that what went down in Syria is the fault of the international community, or the responsibility of this or that country.

In fact, I think that Syrians, and only Syrians, bear responsibility for the war. We have collectively made the conscious decision to kill each other. We placed our very different interests over the interests of our nation as a whole.

For ten years, we fought for our sects, for our ethnicities, for our ideologies for our political parties for foreign powers, hell we even fought over oil fields, yet we all failed to imagine a battle in which we all stand on the same side to fight for a better future for our children.

It hurts to say that, but that’s the truth, we, Syrians, did this to Syria, we brought destruction upon our country. We were all “Nero,” in a way or another. We all burned “Rome” hoping to rebuild it to our personal liking. And now, we shall reap what we sow.


When the war started, I didn’t care much, I was young filled with energy and hope. All what I wanted was to have fun. The last ten years took away my energy, my hope and even my love for life.

"We are sentenced to hope," as once said Syrian writer Saadallah Wannous. I have always believed in the power of hope. Now, I don't.

Today I watch quietly as my country collapses on itself like a dying star, well-aware that what happened can’t be reversed or fixed. Soon, Syria, that I dearly love, will go in a supernova and turn into a place completely different from where I grew up.

from Syria
close observer of the Syrian battlefield ,analyse weapons and strategies
write about new weapon systems in the Syrian field ,and post-battle analyse